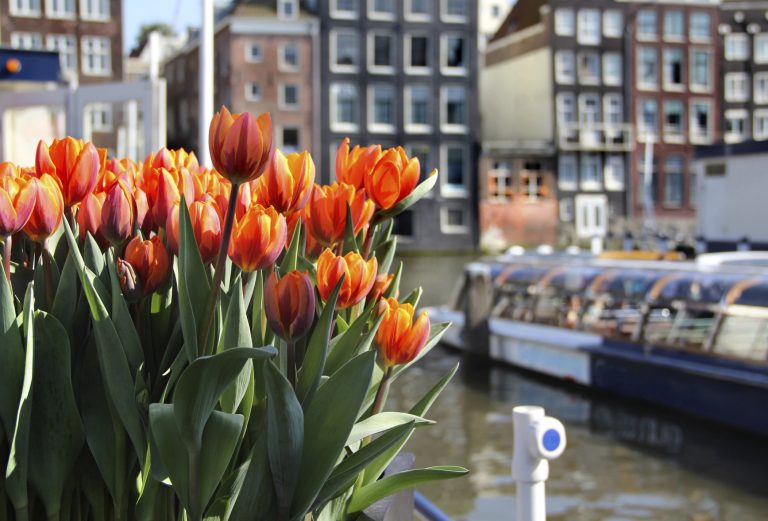 The ticktock of a wall clock in the office where Annet and Adrie Oomen waited seemed a slow dirge compared to the staccato rhythm that shook Annet’s heart as she prepared to hear her son’s diagnosis. Outside the building, life in Holland went on as normal. Trains ran on schedule, people rode bicycles beside the canals, tulips lifted their heads to the sun and the warm scent of freshly baked bread and pastries filled the air. But Annet was oblivious to it all. Her life centred on a single burning quest—to find help for Desmond. At only 4 years old, his world was spinning out of control. Thus far, no one had been able to explain why. Sighing wearily, Annet silently recounted her son’s brief, sad history. He’d been difficult from birth, crying inconsolably. At 3, he’d developed severe behavioural problems and stopped responding to his parents. Since then, he’d spent his days either running compulsively through the house or sitting alone staring blankly into space. He’d spoken only gibberish, and lived in a world where he was the solitary character. He showed little emotion, except for fits of rage.

On his fourth birthday, Desmond had started school—his behaviour wreaking havoc in the classroom. His teacher had said, “Something is very wrong with this child.” She wouldn’t let him back in class until he’d gone through a six-month battery of tests. Now, at long last they would get answers to their questions.

The woman, a well-respected specialist in Europe, cleared her throat and opened Desmond’s file, “Your son has a very serious form of autism.”

“OK,” Adrie said, leaning forward, “how do we cure this autism?”

“There is no cure. It’s a complex disability that manifests during the first three years of a child’s life due to a neurological disorder that affects how the brain functions. In addition to autism, Desmond has a behaviour disturbance and is mentally handicapped.

“We recommend he attend a special school for children with autism and psychiatric problems….The most you can expect is that he might someday get accepted into a special home.”

Suddenly, time stood still for Annet. Her heart slowed, keeping beat with the ticktock of the clock. She wondered how it could keep beating at all.

Somehow, it did. Somehow Annet and Adrie survived the heartbreak. But as weeks turned into months they realised that, like Desmond, they too had lost control of their lives. Their whole world now revolved around his condition.

“His behaviour was so unpredictable our friends stopped coming by, and we only took him to visit relatives,” Annet explains. “Taking care of him was all-consuming. He banged his head on the floor. He slept very little. He refused to eat and was underweight. When his sister and brother were born, he never responded or reacted to them. The only thing that interested him was insects.”

Annet was a Christian; Adrie was not. At church Annet found comfort, but no answer to the nightmare that was destroying not only her son, but her marriage and family as well. By the time Desmond was 7, Annet had lost all faith that even God could help them. In despair, she stopped going to church.

Still, life marched relentlessly on. Every weekday morning, Desmond went to his special school at 7:15…and every afternoon he returned home at 5:30. His school days exhausted him. But even so, most nights he didn’t sleep. When he did sleep, it was usually for no more than four hours, which meant short nights for his parents as well.

Annet and Adrie were often tired and yearned for a break, but any deviation from the routine was out of the question. “Autistic children can’t handle change or spontaneous events,” Annet explains. “If it was a beautiful day, we couldn’t just pack up the family and go to the beach. If we wanted a trip to the beach, we had to explain it to Desmond several days ahead. Then each day we had to remind him when we were going to the beach. When the day arrived, even if it rained, we had to go to the beach, because he couldn’t shift gears. Each day at exactly 6 p.m. we had dinner. At exactly 7 p.m. he brushed his teeth. We spent all of our time trying to satisfy Desmond. Autism reigned in our house.”

In 1996, one of Annet’s friends invited her to visit Jubilee Church, under the leadership of Pastors Hans and Herma Oudhoff. From the moment Annet stepped into the small congregation, she experienced the love of God and the presence of the Holy Spirit.

When Pastor Hans heard about Annet’s situation he said the first positive words she’d heard in years. “Annet, you came to the right place because God wants to heal Desmond and He will heal him.” Annet was furious. For eight years she’d lived with an autistic child. After years of specialists giving their expert opinions about Desmond’s condition, how dare this medically untrained pastor even suggest that God could heal him?

After a few days, however, Annet began to reconsider. “I started thinking about what Pastor Hans said to me,” Annet remembers. “He read Deuteronomy 30:19, ‘I call heaven and earth as witnesses today against you, that I have set before you life and death, blessing and cursing; therefore choose life, that both you and your descendants may live’ (New King James Version).

“I kept thinking about that and wondering, What if it’s true? What if Desmond’s healing hinged on a simple choice to believe or not to believe? I decided I would go back to church and do everything God told me to do through His Word and through my pastor.”

Pastors Hans and Herma, who were Partners with Kenneth Copeland Ministries and watched the daily broadcast on TBN satellite TV, had ordered the six-tape Healing School series by Gloria Copeland. There were some extremely sick people in the church they were pastoring, so they decided to translate the tapes into Dutch.

“November 1996, my pastors started teaching weekly Healing School which I attended,” Annet says. “Until then I didn’t know I had a covenant with God, and I had no idea the depth of what Communion promises. I didn’t know God hates sickness, and that it came from the devil. I didn’t realise the Bible says Jesus healed everyone who was oppressed of the devil. And I certainly didn’t know the power of my words.

“Healing School opened my eyes—no matter how impossible Desmond’s situation appeared, there is nothing impossible with God…I realised that for years I’d prayed out of fear and not faith. I’d also been double-minded—I asked God to heal him and then talked on the phone with everyone who called to hear the sad story of our lives. I had to change my prayer life, my words and who I talked to. I stopped spending time with people who didn’t have faith for Desmond to be healed. Most of all, I started speaking God’s Word over Desmond instead of man’s words.”

Annet also started taking Desmond to church. Since services often lasted for two hours or more, she expected to have trouble keeping him calm. To her great surprise, a peace fell over Desmond each time he stepped into church. It was the one place where he was at total rest.

Elsewhere, his obsessive tendencies were as bad as ever. But Annet used them for his own good. For hours on end, she taught him to confess, “I am healed.”

In addition to attending church and Healing School, Annet watched Christian programs after everyone else was in bed. She attended services at Eagle Mountain International Church via the Internet. Not a single thing changed. Desmond continued to live in his own world while the rest of the family orbited around him.

From 1996 until early 1998, Annet continued her faith stand for Desmond’s healing, refusing to be moved by her circumstances, looking solely at God’s Word which said by Jesus’ stripes we “were healed.” Jesus paid the price for Desmond’s healing on Calvary when He paid the price for his salvation. Because Annet believed that, she praised and worshiped God, regardless of the circumstances.

Nothing about that day marked it as special. Snow blanketed Holland, hiding the hope of spring’s vibrant green and vivid red tulips beneath a pale, icy crust. As Desmond crunched his way into the school, Annet knew that in a few months God would free the flowers from their frigid hiding place; and she fully expected Him to free Desmond in the same way.

That afternoon after school, 10-year-old Desmond did something he’d never done before. He walked up to his mother and looked her in the eye.

“Mom, can I ask you something?” he said. “Why am I at a school with strange children? They don’t talk to each other. They push each other down. They scream….”

Tears streaming down her face, Annet ran to the phone and called her husband. “You better come home because our miracle has arrived!”

Adrie dropped his tools and sprinted to his car, arriving home within minutes. For the first time, he sat down and had a conversation with his son. Annet couldn’t stop crying. Adrie couldn’t stop grinning.

A Date with Destiny

In the aftermath of Desmond’s miracle, Adrie gave his heart to the Lord Jesus, as did Annet’s mother, father and other friends and relatives. Annet and Adrie asked the specialists to retest their son. “He plays well with the others,” they were told. “He listens well. He communicates well. He is obedient. He has a good grasp of sums. He is one year ahead in his reading level.”

Those weren’t the only changes. Desmond had never been able to ride a bicycle, skate, catch a ball or play sports. Now his motor skills were normal.

In April 1998, Annet and Adrie enrolled Desmond in public school, much to the disdain of the psychiatric staff at his special school. Annet and Adrie had to sign a document assuming responsibility for all the ‘risks’ involved. There was a long waiting list for the special care Desmond was getting, and no easy way back.

But he was not going back. He went from a classroom of seven students to a class of 30. He mixed with hundreds of children on the playground. Within a few weeks he was riding a bike and playing sports. “For the next two years, we taught him things most children had already learnt: that cars run on gasoline, you have to pay for groceries and florists sell flowers,” Annet recalled. “By the time he was 12, he had caught up on everything he’d missed.”

When Desmond finished elementary school, he was admitted to Holland’s highest academic program where he not only excelled in his studies, but in sports as well. At 6 feet 5 inches tall, he is an avid soccer player. Now 18 years old, Desmond plans to study law. He is extremely sociable, and filled with joy and good humour.

“The mountain in Desmond’s life called autism didn’t just move. It collapsed!” Annet laughs. “How do you say thank you for a miracle like that? I thank God every day, for He is the healer. But I can’t help but wonder what would have happened to Desmond if Kenneth and Gloria Copeland and Hans and Herma Oudhoff hadn’t answered the call of God on their lives. I am eternally grateful they did.”

Today, Desmond Oomen’s life is no longer spinning out of control. It’s simply spinning—with love and laughter, faith and family. The boy who once had no future is hurtling toward his own divine destiny, and the family that once revolved around the autism that plagued him has found another, more divine orbit, in the light of the Son of God.