Day Twenty Five: Shine His Light on THE GREATEST GIFT 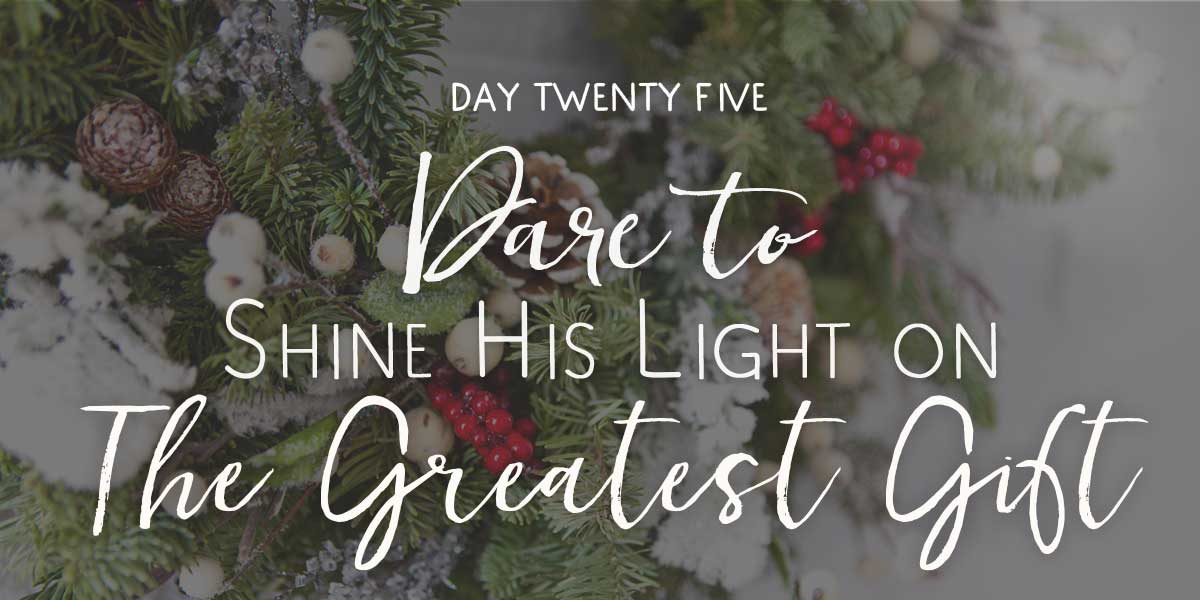 25 Day's of Christmas
Comments Off on Day Twenty Five: Shine His Light on THE GREATEST GIFT

Christmas often provides wonderful opportunities to share your faith with those who think Christmas is only about Santa Claus, presents and Frosty the Snowman. Between parties, school functions with your kids, and family gatherings, the odds are that you’ll be surrounded by people who don’t know The LORD. As believers, we are called to be a light to others and to always be ready to share the greatest gift anyone could ever receive—the gift of salvation. The thought of sharing your faith may send chills up your spine. And in some cases, you may see a particular group of people as a lost cause because they’re “too far gone” or even hostile toward Christianity.

The LORD never writes anyone off, and neither should we. We may be the very people He will use to reveal His love to them. That reminds me of a story. In the early years of our ministry, Gloria and I would be talking with someone and they’d mention a certain city and say, “That’s the worst place in the world to preach. It’s so spiritually dead, no one can have revival there.”

Gloria always knew what my response was going to be. Before I could even open my mouth, she’d say, “Well, I know where we’re going.” If they said it was the worst place to preach, I was determined to preach there! I’m still that way. I was reminded of it recently when I was telling some people about the first time I preached in Las Vegas. I could almost hear what they were thinking.

Sin City? You held meetings in Sin City? Yes, I did, because that’s where the sinners are! I didn’t hold the meetings in a church, either. Although these days I do preach in churches there, back then my venue was the Sierra Hotel and Casino. I chose that location because of a phone call I’d gotten from my friend Wayne Cochran. He’s a preacher now but he was once a major rock ’n’ roll star.

For years, Wayne had the longest-running show in Las Vegas, and he practically lived in the Sierra Hotel. After God got hold of him and changed his life, he led the owner of the hotel to The LORD. “Wayne, now that I’m a believer, I want to do something for God,” the converted hotel owner said. “But I’m stuck in this hotel! Do you think Brother Copeland would come and preach a meeting here?” Wayne told him he was certain I would—and, of course, he was right. I was thrilled at the thought of preaching the gospel in a casino. The whole reason I’m on earth is to bring the good news about Jesus to people who need it. Taking His light into the darkest of places is what I was born again to do. If you’re a believer, the same is true of you!

God didn’t save you and then leave you here on this sin-plagued planet just so you could sit around and complain about how spiritually dark it is. He didn’t save you so you could sit here waiting for the Rapture and wishing all the sinners would leave you alone. No, you and I and every other believer have been called, equipped and sent by God into this world for a specific purpose, and in Philippians 2:15-16, the Apostle Paul told us what that purpose is—to shine our light in a dark world.

“But Brother Copeland, you don’t understand the kind of darkness I have to put up with!” you might say. “When I go to work every day I’m surrounded by people who cuss and act ugly and make fun of me for being a Christian. It’s too much for me to handle.” No, it isn’t. You have the same Holy Spirit living in you the Apostle Paul had living in him, and Paul not only handled more dark situations than you can imagine, he overcame them.

When the Apostle Paul wrote the book of Philippians, he was locked up in prison and surrounded by wickedness at its worst. Some believers wonder why Paul had to go through such hard times. The answer is simple: Jesus asked him to do it. He showed Paul, before he ever went into ministry, the things he would suffer for Jesus, and Paul agreed. (See Acts 9:16.) He knew he would not just be in church services, but places of deep darkness, absolutely steeped in sin.

“But Brother Copeland,” someone might say, “sometimes I just don’t feel very shiny. Even if I did, I don’t know where God would want me to go and what He would want me to do.” Then stop focusing on your feelings. Instead, focus on Jesus who came, shed His blood and put His own light on the inside of you. Ask Him to reveal His plan to you. If His will is a mystery to you, you can just pray about it in other tongues and trust Him to reveal it to you.

That’s how I ended up preaching the gospel in the Sierra Hotel and Casino all those years ago in a city that’s absolutely famous for sin! Of course, as it turned out, a lot of other believers had gotten there before me. They’d actually beaten me to the punch. One of them showed up just before the meeting started, when I was about to go out and preach. He stuck his head through the curtain behind the platform where I was standing and said, “Brother Copeland! I’m a blackjack dealer, and I’m working the floor tonight so I can’t be in the meeting, but I just want you to know a lot of us here will be praying for you!”

I probably looked a little startled. “Really?” I said. “Oh yeah! A lot of us who work here are born again. We witness and win people to Jesus all the time. Those of us who aren’t working will be at the meeting tonight. The rest of us will be backing you up in prayer.” I had to laugh! Here I thought I was going in there to break new ground, and God had already invaded the place. He already had people positioned there. Those meetings turned out to be some of the greatest we’ve ever had!

The Power of Obedience

One day, in between meetings, I was walking through the hotel and The LORD drew my attention to a particular couple, a man and a woman who looked to be in their 30s. I want you to witness to them, He said.

I obeyed Him and right there in the middle of the hotel, after asking their permission, I told them everything The LORD instructed me to say. When I finished, they just looked at me with blank stares. I thanked them for their time and walked away. Well, that went over big, I thought. I hadn’t taken more than about three steps when another fellow stopped me. He’d overheard the things I’d shared and wanted to talk to me. “I’d like you to pray for me,” he said.

Although he was so drunk he could barely stand up, he leant against the wall, and I laid hands on him. The power of God hit us, and I found myself praying all the same things I’d just finished telling the other people. I realised with a shock that God had been talking to this man all along instead of to them. Why He chose to do it that way, I don’t know. He’s the Boss. I just work here. I just do what I’m told to do. But I can tell you this: By the time I finished praying, that man was stone-cold sober—standing upright, with his hands raised, praising God and praying in tongues.

“I want to thank you!” he said. “I’m a backslidden Pentecostal preacher. But I’m not backslidden anymore. I’m back!” Years have come and gone since then, but I still love having those kinds of encounters. I still relish those kinds of fights: first, because the devil is the one I’m fighting; and second, because Jesus conquered him at Calvary, so they’re fights I can always win. This is why we, as believers, are here, my friend! To fight the good fight of faith.

As you prepare to spend time with those who don’t know The LORD today, pray, listen to God and get your marching orders. You will probably end up like me…surprised and amazed at how God will use you to shine His light on the most precious gift they could ever receive, the gift of Salvation. To your family from mine, Merry Christmas. And remember…Jesus is Lord!

Dare to Shine His Light on the Greatest Gift This Christmas!