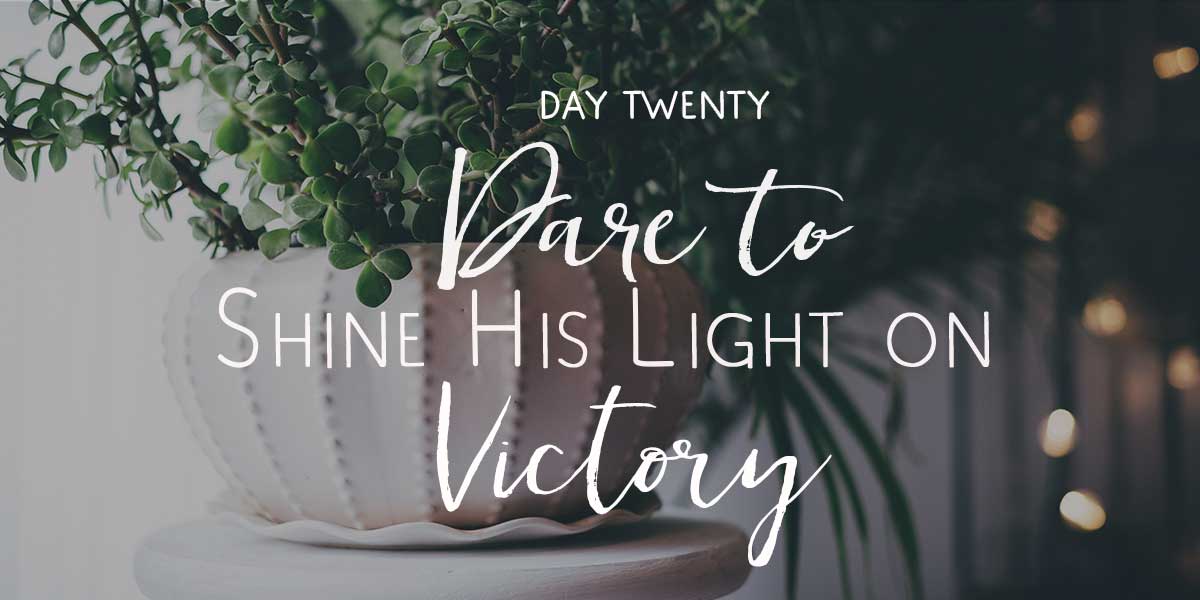 25 Day's of Christmas
Comments Off on Day Twenty: Shine His Light on VICTORY

On Thanksgiving Day and Christmas Day, millions of Americans gather around their television sets to cheer on their favourite football team to win. We even enjoy small victories in our lives—Christmas lights hung on the highest peak of the house, a snowman that took four hours to build, and a pumpkin pie made from scratch that’s actually edible.

Victory. It’s what we’re all searching for, isn’t it? And not just the small wins that come from our favourite team winning the game or building a snowman. We want victory for the big things in life – like our finances, careers, ministry, health and relationships. Webster defines victory as “final and complete supremacy.” That means when it’s over, it’s over. There is no more vying for the position of triumph. It is finished. And you have the crown.

You might be thinking, I could use some victory right about now. The good news is that you have it! First Corinthians 15:57, AMPC, says, “But thanks be to God, Who gives us the victory [making us conquerors] through our Lord Jesus Christ.” That means, the victory has already been won—our victory. Because of Jesus, we are not fighting for a position of victory, we are fighting from a position of victory.

When you think of a victor, you think of someone who won a battle or competition, and you also think of someone who took the spoils. If you have ever watched the Olympics, you know that there have been quite a few times when a team won an Olympic gold medal due primarily to one person’s effort. Even a player who sits on the bench during the medal rounds will still receive a gold medal because he or she is aligned with that team. We, as believers, have aligned ourselves with Jesus. Though we played no part in the victory he claimed on the Cross, we are partakers of the spoils because we’ve received what He did for us.

What is the prize? Whenever there is a competition that involves a reward of some kind, the first thing everyone wants to know is what is the prize? People want to know what they’re fighting for. It helps them to decide if it’s worth the effort and to determine what is at stake if they lose the fight. In this case, the prize is total victory in every area of your life. I’d say that’s worth fighting for! You already have it, but there’s an enemy who wants to take it from you or, better yet, convince you that you don’t even have it in the first place.

hat are the spoils that you have through Jesus? He won victory over death, grief, sin, sadness, lack, poverty, sickness, disease, strife, division and so much more. He defeated everything under the curse (Galatians 3:13). That’s a big victory! It belongs to you—you just have to fight to keep it. Here are four steps to ensure that you keep your victory!

Four Steps to Ensure You Keep Your Victory

1. Make the decision: I will not be defeated; I will receive from God (1 John 5:4-5). What would happen if those Olympians we talked about went around acting sad, defeated and miserable after winning their gold medals? What if they kept talking about how they just can’t seem to win? You’d say, “You’ve already won!” That’s what Jesus is saying to you today. You’ve already won! But, you have to collect your prize and gather your spoils. He isn’t going to do it for you. He already did everything on the Cross. Your job is to receive those gifts and refuse to be defeated in life. You’ve already won!

2. Resist Satan: Refuse to entertain his thoughts (2 Corinthians 10:3-5; James 4:7). As you begin to wonder in your mind, you will begin to wander from God’s best. Anything that does not line up with the Word of God is a thought that must be cast down immediately. Don’t even entertain it. When thoughts do come in, respond and talk back with the truth of God’s Word concerning your situation. We have victory in every area of our lives—so find the scripture that matches your problem and speak it in the Name of Jesus, believing you receive it

3. Give your attention to God’s Word(Proverbs 4:20-22): Fix your mind on God’s Word (Joshua 1:8). The more time you spend in His Word, the more the truth of your victory through Christ Jesus will become a reality in your life. It will be more real to you than your circumstances. Purpose to avoid feeding your spirit negative influences (media, secular television). Faith comes by hearing—the Word of God (Romans 10:17). Fear comes by hearing that which is contrary to the Word of God

4. Refuse to speak words contrary to what you believe you have received from the Lord(Mark 11:23-24): Answer every doubt immediately with the Word of God — that includes every symptom of sickness, unforgiveness, lack, strife, fear, etc. Put His Word ahead of the word of the doctor, the bank, your co-workers or your friends. Your victory is voice activated—make sure you’re only speaking victorious words.

Live a Life of Victory This Christmas!
As you are consistent in these steps, victory will become a regular part of your life, just as Jesus promised in John 14:21: “Those who accept my commandments and obey them are the ones who love me. And because they love me, my Father will love them. And I will love them and reveal myself to each of them.”

There will be trials and troubles in this world.  But, through Him, you’ve overcome them, mastered them, suppressed them and prevailed over them—conquered them. To conquer means “to get the better of in competition or struggle, to master, suppress, prevail over, overwhelm, surmount, to gain superiority, to subdue, to vanquish, to crush, to defeat.” No wonder 1 Corinthians 15:57 shouts, “Thanks be to God Who gives us the victory, [making us conquerors] through our Lord Jesus Christ” (AMPC)! Know that you are joined up with the One who has conquered the world, the flesh and the devil. Shout hallelujah and enjoy the victory! You have world-overcoming victory faith!

Dare to Shine His Light on Victory This Christmas!