Legacy of Faith, Legacy of Love 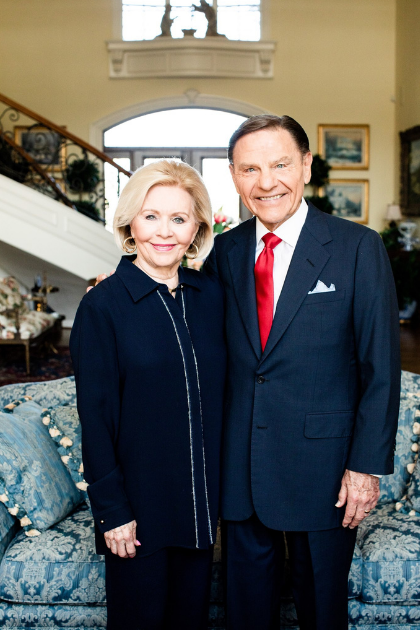 60 years ago this month, a union took place that changed the course of history for many—Kenneth Copeland and Gloria Neece wed in Little Rock, Ark. At the time, their marriage seemed like an everyday union. Kenneth was a 25-year-old Army veteran of the Korean War and a pilot. Gloria was a 19-year-old college student. They hadn’t known each other long, less than six months, but they both now admit that there was something special about the first time they met.

Gloria recalls that when her father introduced them, there was light all around Kenneth. She assumed he was standing in front of a window. It was only years later that she learned that the room where they met had no window at all. She’s wondered many times if the light was God’s way of getting her attention and leading her down an extraordinary path.

Kenneth admits that at the time he met Gloria he was struggling with depression and anger. The effects were so profound that he doubted that love even existed. Meeting her convinced him otherwise, though. He fell in love with her at first sight and asked her to marry him on their first date. She surprised him by saying yes.

Five years later, both Kenneth and Gloria had accepted Jesus as their Lord and Savior. They didn’t know it yet, but God was preparing them for their future. It was during this time that Kenneth received the call into ministry while standing in the Arkansas riverbed.

The Lord began training them in the principles of faith. As Oral Roberts’ pilot and ministry helper, Kenneth learned how to minister in excellence and keep Jesus at the center of every endeavor. Together, Kenneth and Gloria learned from Kenneth Hagin Sr. how to walk by faith and not by sight, how to trust wholeheartedly in the integrity of the Word of God, and how to declare the Word in and over every situation.

Together, Kenneth and Gloria grew stronger in the Word and in faith. What they learned individually, they shared with one another, stirring each other up and helping each other to mature in Christ. Soon, Kenneth began teaching other believers about the covenant rights he and Gloria had discovered. In time, Gloria taught believers how to stand in faith for their healing at the ministry’s Healing School. With each decade, with each advancement in technology, God continued to lead Kenneth and Gloria to take the principles of faith even further.

Today, the ministry reaches beyond what they imagined and has had an exponential effect. In addition to its headquarters in Fort Worth, Texas, KCM has six international offices in Canada, Australia/Asia Pacific, Africa, Europe, Ukraine and Latin America. It serves thousands of Partners and Friends around the world and reaches millions of viewers through VICTORY Channel®. Over the last 55 years, it has continued to fulfill its mission “to minister the Word of Faith, by teaching believers who they are in Christ Jesus; taking them from the milk of the Word to the meat, and from religion to reality.”

But Kenneth and Gloria’s union has affected a group even closer to home—their own family. Between them, they have three children, 10 grandchildren and 10 great-grandchildren. Many of them serve in the ministry in some capacity. Some work with Kenneth Copeland Ministries and Eagle Mountain International Church. Others have reached into new areas as pastors, leaders of humanitarian outreaches and caretakers of orphans. And many are raising the next generation of faith warriors.

All of this—and so much more—began 60 years ago when Kenneth Copeland and Gloria Neece said yes—first to each other, then to God. Their union has affected the world in profound ways, many of which won’t fully be understood this side of heaven. Join us as we celebrate 60 years of marriage—may they have the happiest of diamond anniversaries!

Read more about Kenneth and Gloria Copelands’s journey in the April 2022 issue of the BVOV magazine.